Out for one last trip with my camping buddies and every year we choose Golden Ears Provincial Park as our end of “summer” camping trip not just because it’s close to home for the group, but it’s also quiet and serene.  If you just sit with your eyes closed you will hear the birds – chickadees, robins and the occasional raven as well as see some sweet little Chipmunks.

We have stayed in Alouette and Gold Creek campgrounds numerous times over the years. Golden Ears is one of the busiest Provincial Parks run by BC Parks and it is less than a two hour drive from downtown Vancouver (approximately 48 kms).  Golden Ears is located 18 kilometres north of Maple Ridge and covers 55,000 hectares.  The park was named after the twin peaks which are referred to as “Golden Ears”. 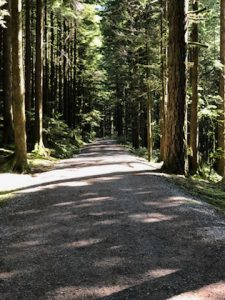 There are three main campgrounds as well as a walk-in Campground at Alder Flats on the West Canyon Trail. There is a sanidump for the RVers and don’t worry if you don’t have the coins – you can pay at the ticket booth.  There is a boat launch, a highly popular day use area that has canoe rentals. The lake has a roped off area for swimming and water fun and is large enough for water skiing.

Alouette Campground – the largest campground has 205 back in well treed campsites, a great playground for the children and also has lighted flush washrooms with showers as well as pit toilets strategically placed throughout the campsite.  Its main camping season runs from the middle of June to the beginning of September. 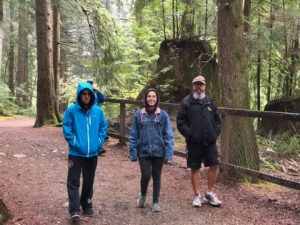 To go to North Beach Campground you will need to check in at the ticket booth and they will give you directions to get to this little unknown part of paradise that has 54 campsites including some great pull-through campsites that are great for RVs, but be forewarned, there is no running water and pit toilets are the only washrooms available, so this could mean a short drive down to one of the other two campgrounds that have water taps.  It does operate from the middle of June to the beginning of September.  Gold Creek Campground which has 149 sites that can accommodate tents, tent trailers, travel trailers and I’ve seen a few big rigs and it operates from March to the beginning of October and also has winter camping starting the first week of October which runs until the end of March.  There are also two group sites available year-round that can accommodate 15-30 people.

Are you wanting to get in touch with nature?  There are quite a few trails around with different levels from beginner to novice.  You have to check the posted signs because not all trails allow bicycles and are meant for foot traffic only.  Some of the trails are Menzies Trail, East Canyon and West Canyon as well as a switchback trail and the Eric Dunning Trail. The ticket booth has a great Trail map for purchase.  There’s also a lower and upper falls trail. And if you get really adventurous, there’s even horse trails. Now that’s not all, there’s a store on site that carries the basics, so if you forget something it’s right there for you. But remember it is only open during the summer months.

For more info on the park visit Golden Ears Park.

For places to camp in British Columbia go to Camping & RVing BC Camping Map.

Post your BC travel and camping photos using the hashtag #CampinBC

PoMoDee (Darlene) is a Social Media Coordinator who manages platforms such as Facebook, Twitter, Instagram, Pinterest, YouTube and Google +. Darlene was born and raised in British Columbia and currently resides in Port Moody. Darlene is an avid camper, who has been camping since the age of two and still enjoys the serene setting of a campsite. Interests include writing, crafting, crocheting, photography and anything and everything Beach.