COVID-19: All non-essential travel into, out of, and around BC must be avoided until May 25, 2021. TIPS and Updated Travel Announcements

Try Geocaching This Year – Fun For The Whole Family

My husband and I began Geocaching four years ago, continuing the tradition of celebrating our anniversary by trying something new.  1,180 Geocaching sites later we are still enjoying this crazy activity.

There are more than 45,500 active Geocaching sites in British Columbia and many will be on the routes you travel and even in or near your campsite.  The coordinates for all of them can be obtained from the  geocaching website which also provides you with a map, description of the cache including its’ size, type of terrain, difficulty level, and logs of people who have looked for it before you. Often there is a hint to help you find it.  Download the app or purchase a dedicated GPS available online or at many retail outlets. 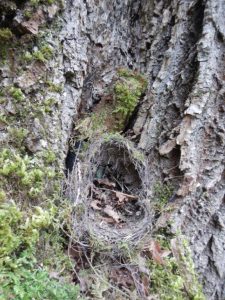 Caches can be as small as a square centimeter to the size of a large trunk.  All have a log and the larger ones usually have tradable items.  You can take a tradable item from a cache if you replace it with something of equal or greater value.  This adds a treasure hunt aspect to the “sport” which is especially appealing to kids.

The very first geocache we found was probably our most memorable. After having searched for several with no success, I told my husband that I could just as easily waste time in my own house looking for things and I didn’t need to do the same thing in the great outdoors!   It was several days after our anniversary and my husband was persisting while I read a book.  Finally, he found one in the parking lot under a hydro tower. It was called Magnetic Morgan and it still holds a special place in our hearts!

People have created caches in ingenious places. A winter cache we were looking for was eluding us.  There was six inches of snow and I was poking around under a tree with a stick.  We finally gave up but when I was putting the stick back down I realized that the cache was hidden in a little hollow that had actually been carved into the stick!  We have found other caches hidden in a bird house, an electrical box, and the caps on the post of a chain link fence. We have found several hanging from the grates of a storm drain cover and several more in rocks which weren’t rocks at all but little containers made to look like rocks. One large cache was filled with about 100 film canisters.  There was a note saying that you couldn’t claim this cache unless you signed the log.  We spent a lot of time looking in the multitude of canisters before finding the log attached to the bottom of large container.  Another cache was at the bottom of a tall vertical tube.  The only way you could get it was to fill the tube with water so the cache would float to the top but there was a drain hole near the bottom of the tube so you had to fill the tube faster than it drained.  Yet another cache required you to put a credit card in a little slot to trigger the opening mechanism.

Travel bugs, also called trackables, are another aspect of geocaching. You pay $5.00 for a stainless steel tag with a tracking number.  You attach the tracking number to a small item and put it in a geocache.  The managers of the site dedicate a special link for each travel bug.  You can see photos that people have taken of your trackable, read comments plus the travel route is plotted on a world map.   My husband and I picked up a travel bug in a cache near our house and placed it in a cache near the Vancouver airport. While there we were joined by a stewardess who was also geocaching.  When she saw the travel bug she couldn’t believe her eyes – she had placed that very same travel bug in a cache in Singapore a couple of weeks before.

When my parents were quite elderly I made a little figurine of the two of them holding hands, gave it the name “Ralph and Alma” and placed it in a cache with a little note saying “this represents the real Ralph and Alma….they have been married 65 years and don’t travel much any more.  They will enjoy following the travels of their namesake.”  The travels of the figurine were enjoyed by both my parents until my dad passed.  Several people wrote lovely notes congratulating them on their long marriage.

Geocaching has taken us to places we otherwise would never have visited. It often gives us an added incentive to go for a drive, walk, a hike or a bike ride.  If you haven’t tried it but would like to, visit the website and click on Geocaching 101.  Enjoy!

Sharon is a retired teacher and mother of two. She especially likes Kayak Camping plus having fun with her husband exploring new country roads with the Sea to Sky Miata Club. She also enjoys line dancing, badminton, painting and sculpture and gardening.