The BC Parks specialty plates cost $50.00 for the initial purchase, and $40.00 for each annual renewal. The licence plates all depict scenes from B.C.’s parks and recreation areas: 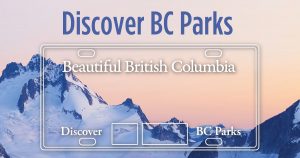 For more information on BC Parks licence plates and where you can purchase your licence plate visit: http://www.icbc.com/vehicle-registration/licence-plates/Pages/bc-parks-plates.aspx